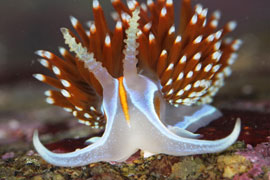 Although they may look delicate – touch the cerata (Fig. 2) on their backs, and they may drop off – but sea slugs of the Aeolididae have sneaky ways to defend themselves. They squeeze out stinging cnidae (Fig. 3) from the tips of their cerata that pierce and inject venom into their predators. But that’s not the sneaky part. They don’t make these cnidae, they steal them from their food (like jellyfish, anemones, corals). Their food species make the cnidae; they are the structures that give jellies their “sting” and make anemones sticky.

Figure 2: Diagram of a general aeolid nudibranch. You can see that the gut is connected to a compartment called the cnidosac. It is in these cnidosacs that the cnidae from their food are stored. Image adapted from Kalker and Schmekel (1976).

Fascinated by these structures, one of the most complex in the animal kingdom, I began my literary research. Cnidarians (the grouping of animals that include the jellyfish, anemones, and corals, to name a few) make over 26 different kinds of cnidae, and they are a good identifying feature. One species seems to make only certain types of cnidae, often relating to what they eat or how they defend themselves.
As I continued my research, I was amazed by a paper by Dr. Kinsey Frick from 2003. She found that her nudibranch, Flabellina verrucosa steals different cnidae depending on which predator was nearby. I was further intrigued because it brought an element of animal behaviour into the mix: to steal these different cnidae, F. verrucosa must switch its food. I thought these results quite neat, so much so that I thought I would replicate the experiment with Hermissenda crassicornis (Fig. 3).
So what did I conclude? I was disappointed to find that H. crassicornis does not change its feeding when exposed to different predators. Which makes me wonder, what’s so special about F. verrucosa?

Figure 3: The 26 identified cnidae, as described by Richard N. Mariscal in 1974.

References
Frick, K. (2003). Response in nematocyst uptake by the nudibranch Flabellina verrucosa to the presence of various predators in the southern Gulf of Maine. Biol. Bull. 205:367–376 DOI