Sea slugs. Delicate, beautiful, DEADLY! These squishy creatures, most notably the opalescent sea slug, have the ability steal stinging capsules (cnidae) from their cnidarian prey, and sequester them in their colourful back projections (cerata). These cnidae are then used to defend the sea slugs from their own predators, including crabs, sea stars, and fish. But not all cnidae are equal; some cnidae can inject toxins, some are long and stringy and will entwine the mouthparts of arthropods, and some are more suited to piercing soft tissue. What I want to know is: If the sea slug is in the presence of a specific predator, will the sea slug preferentially select cnidae that will be most effective against that particular predator?

My name is Mónica Ayala-Díaz. I am doing my Masters degree at the University of Victoria. The purpose of my study is to evaluate the changes in behaviour of the marine snail Littorina sitkana due to the presence of trematodes, as these parasites can alter the behaviour of the snail in order to favour its predation by the next host so they can complete their life cycle. I am focusing on trematodes that have birds as their final host and I am testing if the parasite can get to the bird via direct predation of the snail or if it has another intermediate host. To achieve this, I am performing survival experiments in the field. To test changes in behaviour, I am tracking movement and grazing performance of L. sitkana. 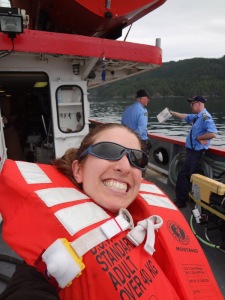 I’m studying hexactinellid, or glass, sponges: a unique group of sponges that are unique because they are syncytial, meaning that instead of cells they have many nuclei all encased within a common cell membrane.  While other animals have small syncytial regions in their bodies (for example, human muscles), for the most part other animals (and even all other sponge groups) are composed of cells.  I’m studying how hexactinellid syncytia form and grow–from food capture to assimilation to growth of tissue, and finally excretion–which, beyond being really cool because it’s so unique to this group, is important to understand because a small group of glass sponges form reefs, just like corals, off the coast of British Columbia.  The reefs aren’t known to form anywhere else in the world today and are habitats for fish, crabs, sharks, and invertebrates; however, they are fragile and how the reefs grow and why they are so rare (the same sponge species can be found as individuals elsewhere, but only form reefs in a few places) isn’t understood.  Human activities such as trawling can destroy the fragile glass skeletons that form the reef, so understanding more about how the sponges work and what their effects are on animals living alongside them are the aims of my research.

I study how the canal system in sponges (Porifera) is designed to allow both water flow and particle capture, and then how sedimentation can impact these filtration systems. Sponges are found in high densities worldwide, and as suspension feeders, they play an important ecological role in the recycling of nutrients.  A single 20-hectare glass sponge reef is estimated to filter 80,000 litres of a second!**  Increasingly, sedimentation from resource exploitation such as oil exploration or fishing trawls is having severe impacts on benthic suspension feeders including sponges, which, as filter feeders, are sensitive to materials that can clog their filtration system.  By understanding how their water filtration system works, we can begin to understand the potential impact of sedimentation. This knowledge can be used to predict what level of sedimentation sponges can tolerate to help manage important ecosystems such as the glass sponge reefs off the coast of British Columbia and the ‘ostur’ in the fjords of Norway.

I am a Master’s student at UVic, currently working on the evolution of sex-ratios in Tigriopus californicus.  T. californicus has a natural sex-ratio distribution that is extra-binomial, which suggests a polygenic sex-determination mechanism—multiple genes (environmental and/or heritable) contributing to sex-determination.  I am interested in Fisher’s theory of frequency dependent selection and modelling the heritable and environmental effects on sex-determination.  Fisher predicts that selection should select for balanced sex-ratios with respect to the relative costs of sons and daughters.  If sex-ratio should deviate from the balanced equilibrium, individuals of the less abundant sex will have a higher per-capita genetic contribution and frequency dependent selection will drive the sex-ratio towards equilibrium.  After many rounds of artificial selection for sex-biased genes, I have established population lines with male- and female-biased sex-ratios.  With relaxed artificial selection, I have been measuring brood sex-ratios for each treatment population for 8 generations.

I am a PhD student working on the growth and development of shell ornamentation (ridges, ribs, lamellae, varices) in gastropods (snails). I want to know how a snail controls when and where to put ornaments, and how that affects them. My work at Bamfield is on two species, Ceratostoma foliatum, that has three, regularly spaced varices, that are precisely placed in the same position on each whorl, and Nucella lamellosa, that has many varices placed in a less controlled fashion. It is thought that Ceratostoma knows where to place each varix by encountering the previous one, and growing a new one in the same place, which I am testing with some shell manipulation experiments. I am repeating the experiments in Nucella lamellosa to determine how these less constrained varices differ in their growth pattern.

Want to learn more about any of these students’ research?  Or do you have questions about what you read about here?  Leave your questions or comments below!