While out at Ross last weekend, we noticed a strange phenomenon of a mussel (Mytilus) bed in the sand. The whole beach up to a certain point was covered in small (~2cm) mussels. Normally mussels are attached to a hard substrate, to give them support against being washed out with the waves.

Mussels in the sand up close. Credit: N Webster 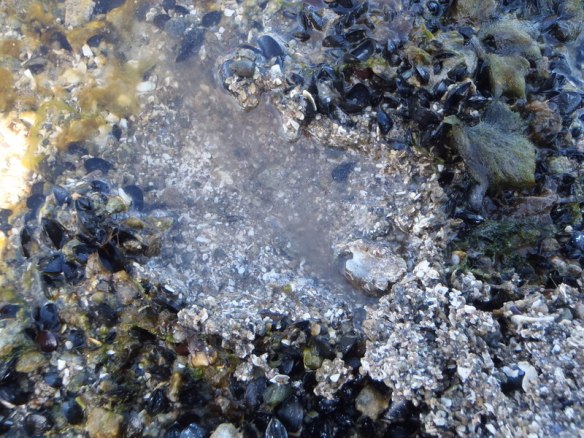 The same patch of mussles easily lifted up to display to loose substrate beneath. Credit: N Webster 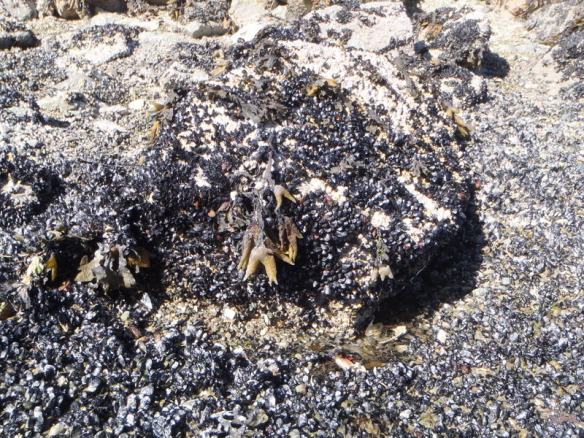 Last year, in July, there were no mussels in the same place. So either the mussels did not grow there last year. Or I think more likely, the mussels will all get detached and/or eaten by July, and just had the poor luck to settle in such an unfortunate place.

Do you have any information or insight on this? I’ll keep my eye on them next time I return to Ross so see for myself.

Living in Bamfield definitely has its perks, one of which is being located in the spectacular Barkley Sound. With hundreds of islands separated by deep water channels, Barkley Sound hosts abundant marine and wildlife along its diverse coastlines, which not only makes it an ideal location for doing research, it also makes for an amazing place to explore during days off! The multitude of islands that occur in Barkley Sound, such as the Broken Group Islands and the Deer Group, have become famous among kayakers and divers alike, and a couple of weeks ago I had the opportunity to see why when I did an overnight kayaking trip to the Ross islets in the Deer Group. 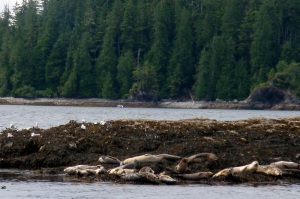 Leaving early in the morning from the Bamfield Marine Sciences Centre to avoid the afternoon westerly winds, we packed the graduate kayak hatches full of camping gear, food, and drinking water and headed out across the Trevor Channel.  With a brief stop at Wizard island to visit some seal friends, we made it to the Ross islets within an hour and a half and set up camp at one of the two camp sites.  Lucky for us, even though it was one of the busiest kayaking times of the year, we arrived just as another group was leaving and so snagged one of the two camping spots on the islet! 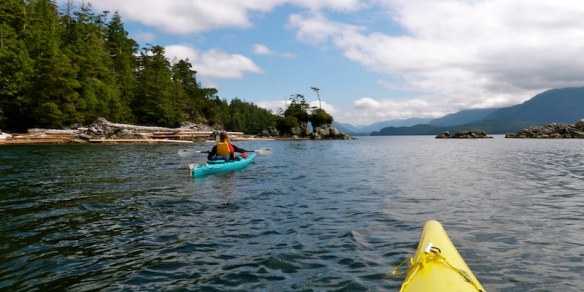 One of the many bald eagles spotted on Fleming Island. Photo credit: D Ludeman

We then had the rest of the day to explore, and taking some advice from the departing kayakers we decided to paddle around Fleming, a large island beside the Ross islets.  Just as we were leaving (enjoying the much lighter kayaks to paddle in!) the clouds broke and it turned into an amazingly sunny day – even though the previous week in July had felt like Fogust!  The calm waters along the Trevor Channel side of Fleming made for some peaceful paddling, and we could even see some sea life through the glass-like waters!  On land, the long sandy beaches were stunning, and it wasn’t hard to spot the many bald eagles on the wind-swept trees!

As we rounded the corner at Tzartus island, we glimpsed this amazing sea cave and just had to go have a look.  Although it was tempting, we decided against paddling through it – probably a good thing too as when we were chatting to our fellow Ross islet campers later that evening, one of them had a story of going for a little impromptu swim right in the middle of the same cave!  Instead, we found a nice little beach to have lunch at, and enjoyed the amazing view that Barkley Sound has to offer. 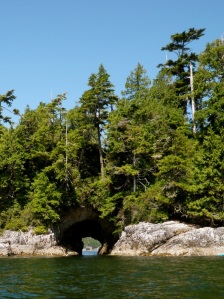 Sea caves are abundant in Barkley Sound, such as this one on the southwest corner of Tzartus island. Photo credit: D Ludeman

After lunch, we left the calm waters of Trevor Channel behind and took off to paddle the side of Fleming along the Imperial Eagle Channel. The waves, although a little challenging, were exhilarating!  And well worth what we were about to see.  As soon as we turned the corner at the North side of Fleming we heard the explosive snort of a humpback whale and looked just in time before it dove back underwater.  We sat there motionless (or as motionless as we could in the waves) waiting for it to grace us with its presence again, and feeling the rush of being so near such a magnificent creature.  After a few more breaths the whale moved on, and so did we to battle the waves and observe the many more sea caves along Fleming.

The many colors of Pisaster. Photo credit: D Ludeman.

Late afternoon we arrived back at the Ross islets, just in time for the low tide! We gave our arms a much needed break and took off exploring the small island on foot, checking out the many tide pools and awesome creatures that they house! From the colorful starfish Pisaster, to the massive californian mussels Mytilus, and the medieval- looking gooseneck barnacle Pollicipes, there was plenty to seek and discover.  And after cooking some dinner on the beach, we sat down and relaxed, watching the tide come up on the rocks, and the sun set behind the Broken Group Islands. 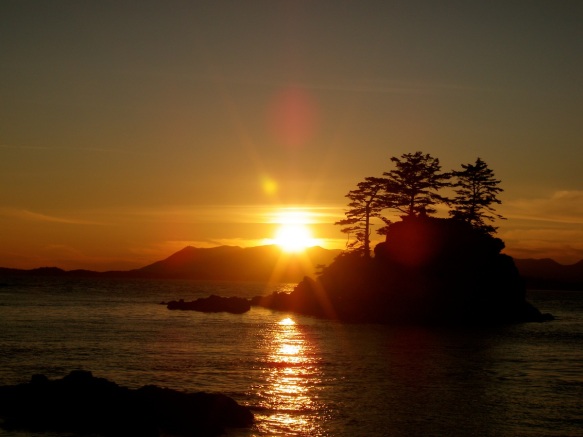