By  Nicole Webster
Anemones are fantastic garbage disposals. If you drop something on one, it will be quickly swallowed and lost. Bad news if it’s something you want to keep. Good news if you have something to get rid of (and a pet anemone).

Despite being green, and having zooxanthellae symbiobionts to photosynthesize for them, Anthopleura xanthogrammica supplement this died with tidal casualties. Or maybe its the reverse.

As the tide rushes in, it dislodges inadequately prepared animals, which fall down into the waiting pit of Sarlacc (remastered tentacles and all). Once down the gullet, they are calmly digested, and the hard parts are ejected later out the mouth.

I have myself saved snails in the process of being swallowed at low tide.

Out on Helby this week, I found a surprising number of crab guts strewn on top of anemones. They appear to be Petrolisthes a porcelain crab. Poor things. 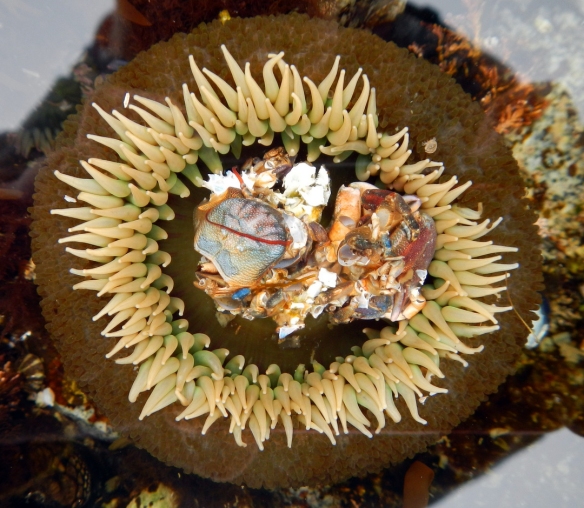 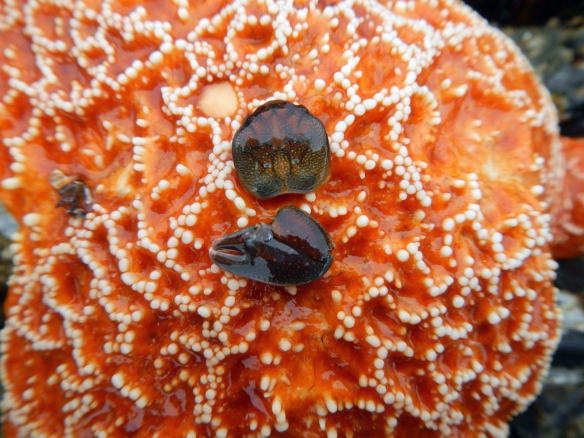 Recovered parts for a clearer ID of all those Petrolisthes, on a background of Pisaster

I caught one spewing while I watched… yum

Amanda posted a few weeks back about the ‘runaway anemone’.

Lo and behold, while I was in Bamfield, a Stomphia was picked up! I was really excited. There’s something special about seeing it for yourself. So one evening I went over and casually dropped a leather star (Dermasterias imbricata) beside the anemone to get the infamous response.

The Stomphia was in a really shallow tank, hence some of its difficulty swimming. I also think it depends at least partially on the current to help carry it away quickly. What you miss is it instantly contracting upon contact with the seastar.

I didn’t speed up the video. I know its slow, but it gives you a good idea of what is actually going on, how slow this process really is.

The video ends when it encounters the Anthopleura xanthogrammica on the side of the tank. I let it try to escape for about a minute, then took it away. I’m not sure that it wouldn’t have been eaten… Anemones are voracious.

After placing it in a safe location in the tank, it took about 2min for Stomphia to right itself and settle onto a rock.

There are two species of Stomphia supposedly found in the region, S. diademon (probably shown here) and S. coccinea. S. diademon are found usually rather deep, at least 80m deep on soft sediment, are are mostly pulled up via trawling.

A Snail’s Odyssey has a nice summary of some of the Stomphia literature (midway down the page:swimming):

So I picked up knitting at Bamfield last fall, and I got a wonderful book at Christmas: It has several cute sea creatures, but I had to start with the Jelly fish:

I’m quite impressed biologically! It’s obviously a scyphzoan with those pronounced oral arms. It has tetrameral symmetry (8 purple patches on the bell), with oral arms and tentacles. There’s a velum, which scyphozoans don’t have, but that’s a knitting necessity to allow the bell to be stuffed. 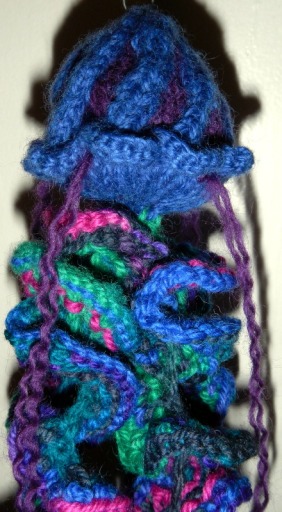 Close-up – the bell is a little overstuffed…

This Jelly is quite small, the bell is only ~5cm in diameter, but I could see the pattern being easily expanded to make a monster-sized one.

My next project is a seastar – We’ll see how that turns out.

If you like knitting, or think you might, be sure to ask about Beth’s knitting nights at BMSC! She’s an excellent knitter and teacher, and knitting is a great way to meet people, and a perfect hobby for cold and wet falls, or power outages.